United States - EN
Skip to the end of the images gallery

Skip to the beginning of the images gallery

Summer Squall’ is painted with incredible attention to detail, down to several delicate, reclusive butterflies and beetles that inhabit the vegetal shadows.

From $41 per m² (excluding shipping, duties and taxes)
How to order

Our wallpaper is printed on demand, according to your specified measurements, so that you only receive the wallpaper you need.

After you’ve selected the color and material (fleece or vinyl), you can click on the Configurator button. Using the Configurator, you can specify the dimensions of your wall, scale and crop the design to fit your space. Once your order is complete, we’ll print and ship your wallpaper. Please make sure you’ve selected your (shipping) location to calculate the correct shipping costs and taxes.

Please let us know if you have any questions during the ordering process. We’re here to help!

Scroll down for detailed product specifications.

Once we’ve received your order, we print and ship your wallpaper. Usually we print our wallpaper once a week, on Tuesday, and ship all wallpaper orders on Thursday or Friday. We ship worldwide with FedEx International Priority and FedEx International Economy. Depending on your location and the selected service (Priority or Economy) shipping takes an average of 3-5 days. Click here to get a more detailed estimate as to when your order will arrive.

Peonies, roses and ranunculi play the lead role in ‘Summer Squall’. These full-blooming flowers hover over a middle ground of exploding foliage. Several delicate, reclusive butterflies and beetles inhabit the vegetal shadows. It’s all in motion, a summer garden that’s beginning to stir with the oncoming passing of the season.

Unlike the prints Ellie had designed previously, she had this one named almost from the very start. As I worked on this piece, I almost felt that the peony was drilling into its ground, kicking up stormy winds all around it. It had an unstoppable force to it. Because of things that were going on in my life at the time, it became a symbol for me of the inexorable passing of time.

This wallpaper is available in the background colors: beige, blue, white

You can scale and position the design to fit your space in our wallpaper configurator. At minimum scale (100% scale) the largest white flower is 42 cm (or 16,5") in diameter.

The physical properties of our two wallpaper materials - fleece and vinyl - are listed below.

Ellie Cashman Design® wallpaper is sturdy and durable, easy to clean with a damp cloth and can be removed easily with water. 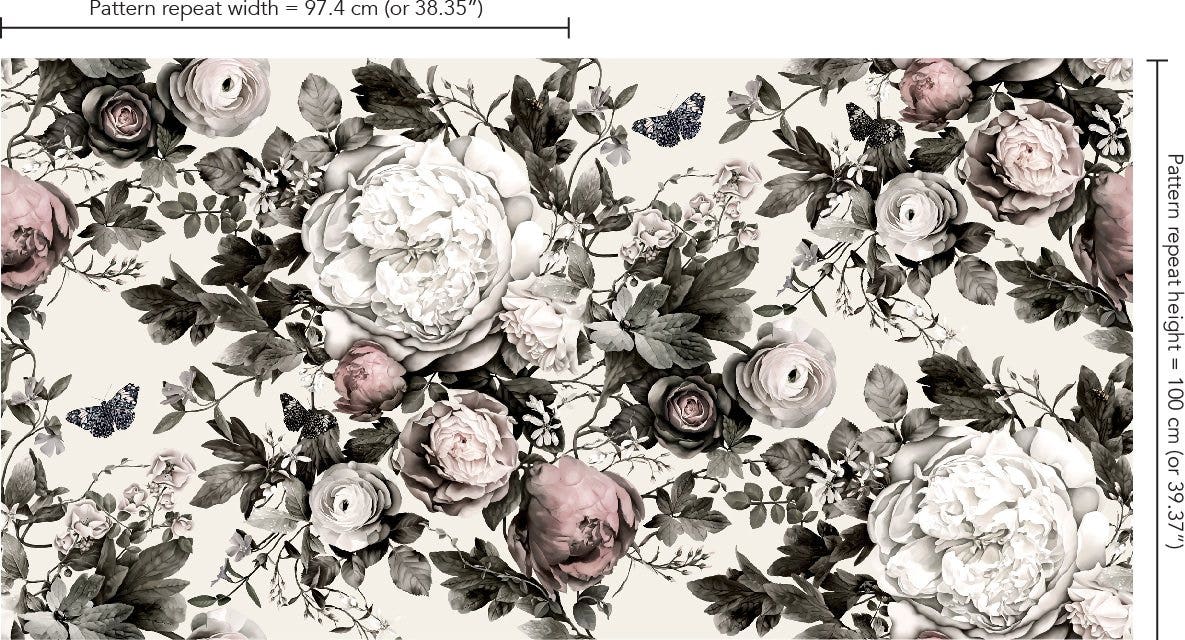 All other countries English